GWM is expected to invest a total of RUB 42.4 billion (RMB 3.7 billion) to build an automobile factory that is able to realize the deep localization of core auto parts including engines, transmissions, electronic control modules, and vehicle control systems.

On September 25, GWM's Tula factory in Russia and the Ministry of Industry and Trade of the Russian Federation officially signed a Special Investment Contract (Hereinafter referred to as SPIC). GWM is expected to invest a total of RUB 42.4 billion (RMB 3.7 billion) to build an automobile factory that is able to realize the deep localization of core auto parts including engines, transmissions, electronic control modules, and vehicle control systems.

As GWM is the first and only Chinese automobile company that has signed the SPIC with Russia, the signing of the SPIC indicates that GWM will enjoy the same preferential policies as other foreign-funded automobile companies in Russia and also a fairer and more open marketing environment. Denis Manturov, Minister of Industry and Trade of the Russian Federation indicated, the high degree of localization will greatly improve the competitiveness of GWM in the Russian market, and the implementation of SPIC will ensure the long-term development of GWM in the localization of key auto components and parts in Russia.

SPIC is a move of the Russian Federation government to provide incentives for investors. It can make tax and non-tax preferential policies accessible to contracted enterprises and also offer them the convenience in the procurement of projects of Russia. It is aimed at stimulating investment in Russian industrial production and supporting the implementation of large-scale industrial projects in Russia.

Alexey Dyumin, Governor of the Tula Oblast said, "We welcome GWM to carry out Phase-II investment in Russia, and the government of Tula Oblast will also create favorable conditions to support the development of GWM in Russia. "We believe GWM has a promising future in its development in Russia, in the Commonwealth of the Independent States, and even in the European region."

Zhang Junxue, Vice President of the Russian project of GWM said, "The signing of the SPIC is an important strategic plan of GWM for its long-term development in Russia, which will further speed up the localized production of GWM in Russia. In the future, GWM will adopt effective measures to fulfill the commitment of investment in auto component and part localization and will further enhance the competitiveness of GWM in complete vehicle products locally. “

Located in the Uzlovaya Industrial Park, Tula Oblast, Russia, GWM' Tula factory is the largest factory project invested by Chinese automobile companies in overseas markets and also the first overseas complete vehicle manufacturing plant of China that covers the four major manufacturing techniques of stamping, welding, coating, and final assembly. It will take four years to complete the construction of the Tula factory with an investment of USD 500 million. It is expected to produce 150,000 automobiles annually, including 80,000 from the Phase-I project. On June 5, 2019, presidents of both China and Russia attended the off-line auto show of GWM's Tula factory in the Kremlin. 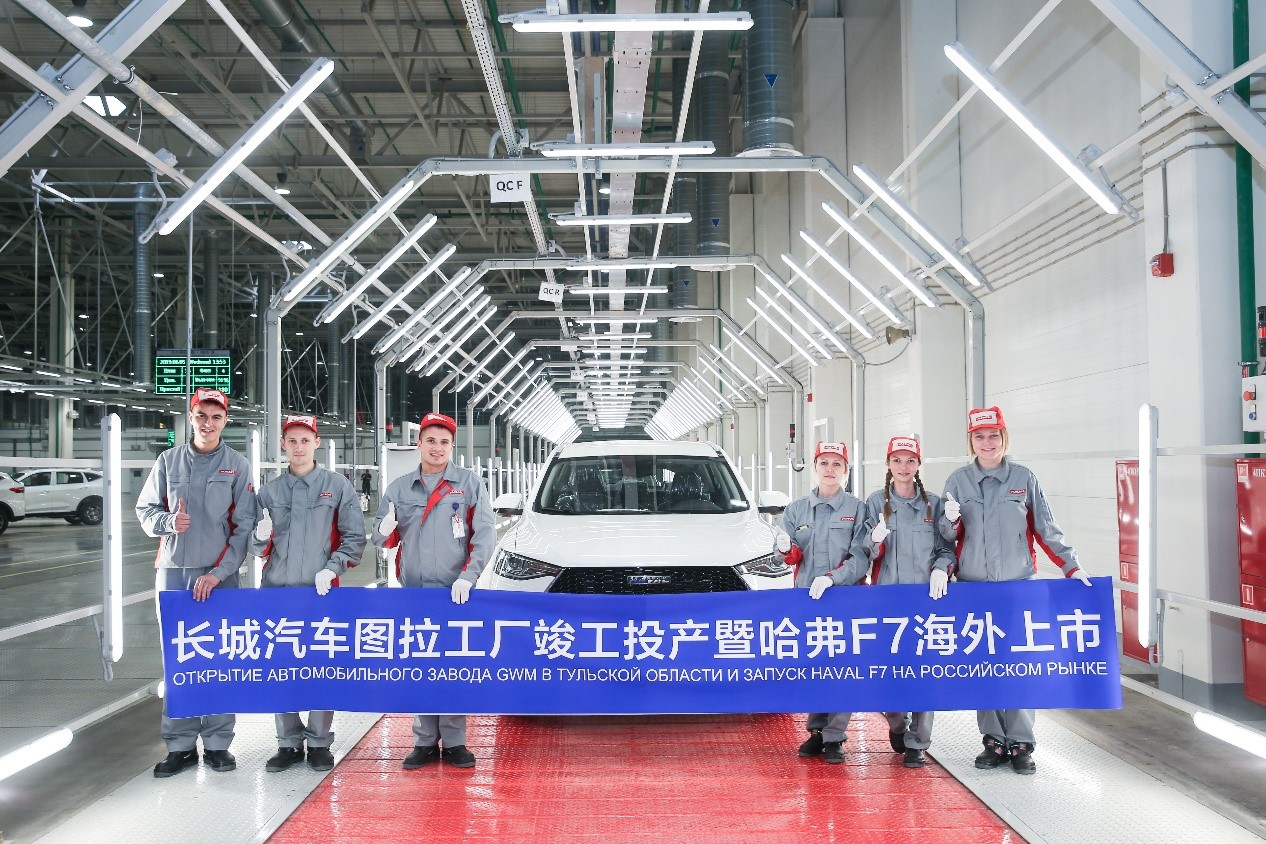 GWM's Tula Factory in Russia Completed and Put into Operation

Since the HAVAL F7 being off the assembly line, the Tula factory of GWM has realized localized production of HAVAL F7, HAVAL F7x, HAVAL H9, and other models, and all models of HAVAL have been recognized by the Russian market and Russian consumers. From January to August 2020, the accumulative sales volume of HAVAL-branded automobiles increased by 75% compared with the same period last year, ranking first among Chinese auto brands in Russia for several consecutive months. Recently, HAVAL F7x have won many awards including "The Most Popular Chinese automobile of the Year", "The Midsize SUV of Russia of the Year", and "The Best Design for SUV", by virtue of the intelligent technologies used and its superb appearance design. 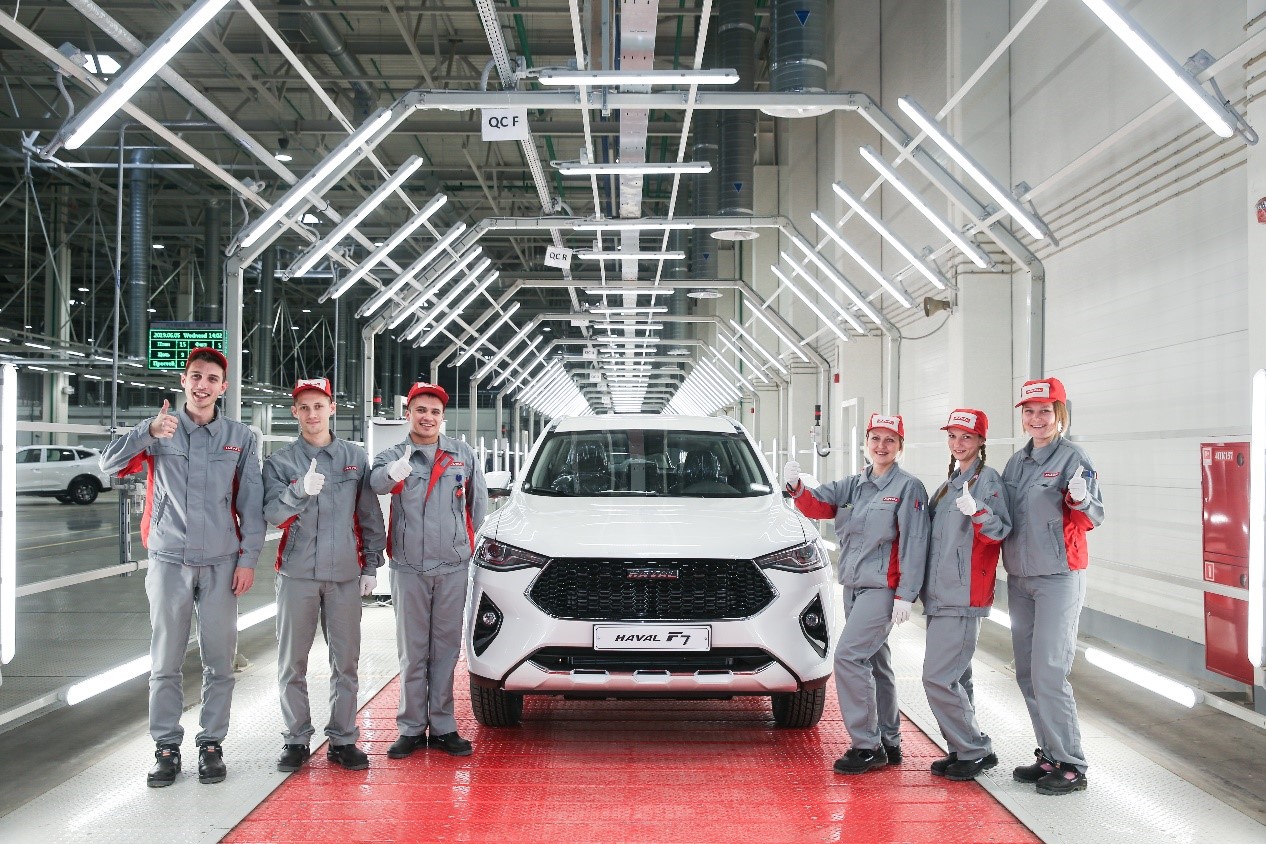 With the accelerated implementation of the globalization strategy, GWM has been making great efforts to improve the quality of products and services based on customers' needs across the world, exploring a road for the globalization of GWM and continuously enhancing the value of Chinese automobile brands globally.