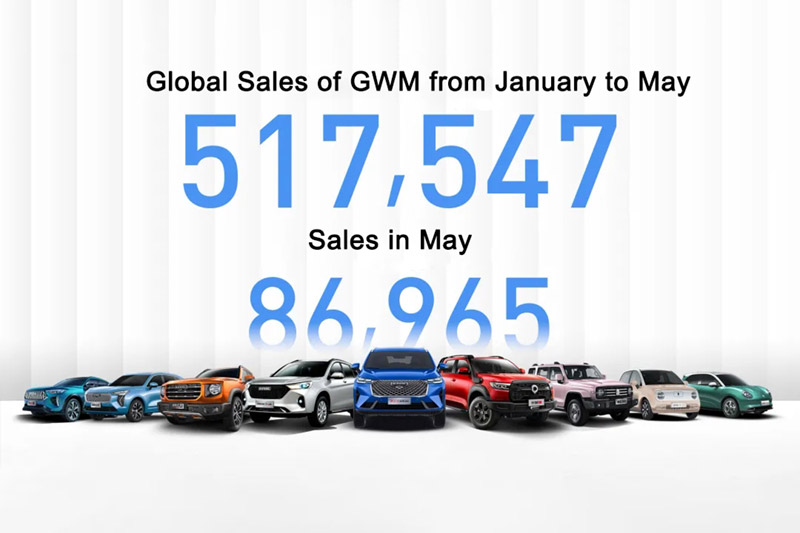 On June 8, Great Wall Motor Company Limited (GWM) released its production and sales data of May. From January to May of this year, the cumulative sales volume of GWM reached 517,547 units, up 65.3% year on year. In May, GWM sold 86,965 new vehicles, up 6.2% year-on-year, including 10,079 sold overseas with a year-on-year growth of 557.5%. In May, GWM's five brands, HAVAL, GWM Pickup, WEY, ORA and TANK, continued to develop both in scope and in depth, build a  better system from multiple dimensions, and embrace the user era with user thinking. 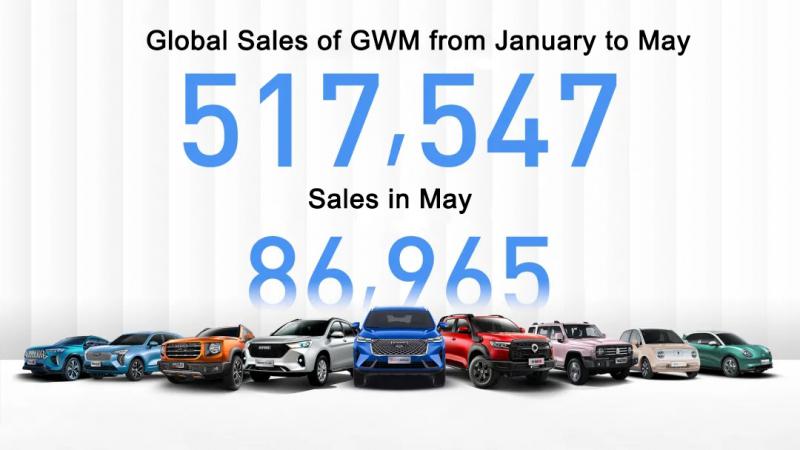 Sales Data of GWM from January to May

As the values of various consumer groups change now, GWM's HAVAL, GWM Pickup, WEY, ORA and TANK are keeping up with the trend, actively responding to users' expectations, and constantly focusing on ecological construction of categories to achieve steady growth in market sales.

In May of this year, GWM continued to exert effort toward its global development. In Chile, GWM integrated local top media and super popular IP resources, so that HAVAL JOLION was snapped up during the pre-sale, setting the fastest pre-sale record of GWM in Chile. HAVAL JOLION has already been released in Chile, Russia, South Africa and Saudi Arabia.

Official website page for pre-sale of HAVAL JOLION in Chile

Only 5 months after launch in South Africa, GWM POER has ranked the fourth in sales of double-row pickups by virtue of its intelligence, safety advantage and role of "super partner" realized by integrating scenario-based activities into user's life. In the "Model of the Year" selection organized and held by the South African Guild of Motoring Journalists (SAGMJ), GWM POER reached the final as a dark horse, and competed for the title of "Best Model of the Year in 2021" in the category of double-row pickup. GWM POER has been released in Australia, New Zealand, Chile, South Africa, Iraq, Jordan, Saudi Arabia and Egypt.

GWM POER, the finalist of "Best Model of the Year in 2021" in South Africa

As the global market continues to deepen the localization strategy, GWM also launched a new retail concept in the world for the first time. GWM opened its first super experience store for new retail concept in Thailand on May 28. Relying on the Internet, the store provides upgraded pre-sale, in-sale and after-sales services of automobile products by online and offline channels based on advanced technical means such as big data. It not only raises the curtain on GWM's marketing network layout in ASEAN market, but also reshapes the structure and ecosystem of automobile sales businesses in Thailand, and continuously provides an impetus to the transformation and development of ASEAN automobile market. Soon after, a second super experience store for new retail concept was quickly opened in Thailand by GWM, showing the rapid expansion of GWM's new retail sales mode in ASEAN market.

Thanks to great achievements in global development, on May 10, GWM was listed among "2021 BrandZTM Top 50 Global Brands in China" and "Top 20 Chinese Star Brands" in emerging markets such as India and Brazil, demonstrating its influence and reputation in the eyes of global consumers.

Facing the challenging new competitive landscape, GWM strives to embrace the user era, create a brand-new category ecology by user co-creation, improve the system with a more perfect enterprise layout, further develop the global market, and continued to develop both in scope and in depth, so as to accelerate GWM's transformation into a "global mobility technology company".