Since the beginning of this year, following the concept of "customer-centric", GWM has continuously implemented the category-focused strategy, optimized the product and brand structure, actively pushed forward the upgrading of new energy and intelligent technologies, and earnestly practiced the enterprise reform and global development, promoting the continuous improvement of the business performance and financial status of the enterprise in an all-round way. As of June 30, 2021, the total assets of GWM were valued at CNY 157.178 billion, with an increase of 2.06% compared with the value at the beginning of the year; the net cash flow from operating activities reached CNY 15.11 billion, with a year-on-year growth of 58.77%; the ending cash and cash equivalent balance reached CNY 21.064 billion, with a year-on-year growth of 17.34%. GWM is now transforming into a "global mobility technology company" constantly and steadily.

The experience upgrade brought out by the continuous implementation of forward-looking technologies is also a key factor for the continuous increase of GWM's sales volume. In the first half of 2021, GWM invested nearly CNY 2.9 billion in science and technology research and development, with an increase of 63.15% compared with that for the same period last year. The investment has been used to accelerate the introduction of forward-looking technologies such as efficient fuel power, intelligent driving and intelligent cabin into new products, and to deepen the innovation of new energy and intelligent technologies. Among them, the 3.0T+9AT/9HAT super powertrain will be implemented for the first time in the TANK 500 unveiled at Chengdu Motor Show 2021. In addition, GWM will launch the world's first C-class hydrogen fuel cell SUV this year with the assistance of the "Hydrogen-L.E.M.O.N. Technology", accelerating the industrialization and commercialization of hydrogen energy automobile products.

From January to June this year, GWM has made great achievements in the global competition. Thanks to the outstanding performance of the 3rd Gen HAVAL H6, HAVAL JOLION, GWM POER, and other global models in overseas markets such as Russia, Australia, Chile, and South Africa, GWM's overseas sales hit new highs, with overseas sales volume totaling 61,559 vehicles in the first half of the year and a year-on-year growth of 133.24%, which further contributed to the steady growth of the half-year performance.

Considering the great global market demand, GWM has put forward a new strategic goal of overseas sales volume totaling 1 million vehicles in 2025, and has made continuous efforts to this end. Recently, GWM and Daimler Group signed an agreement on the acquisition of the Erasemapolis factory in Brazil, and the business transaction is expected to be completed before the end of this year. This move will accelerate the development of GWM in the South American market. The complete vehicle production base of GWM in Jingmen has also been officially put into operation, which will continue to strengthen the competitiveness of GWM in the global system. At the same time, GWM has also entered overseas markets including Nepal, Iraq and Brunei with its products such as the 3rd Gen HAVAL H6, HAVAL JOLION, and GWM POER, and continued to expand the market of South Asia, the Middle East and ASEAN. In July this year, the sales volume of GWM in Russia reached 2,932 vehicles, with a year-on-year growth of 60%; GWM Pickup has become the No. 1 seller in the industry in Chile, and HAVAL has been listed as one of the Top 5 compact SUV brands in Egypt, demonstrating the increasing global competitiveness of GWM. 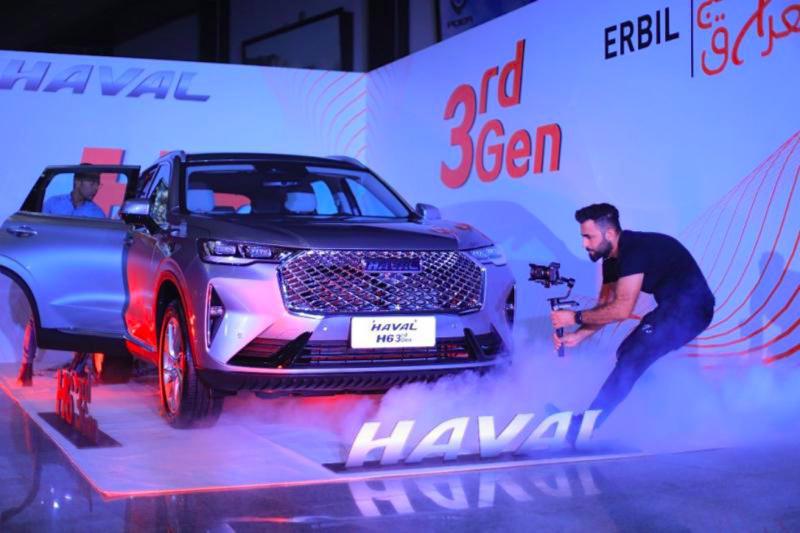 The 3rd Gen HAVAL H6 has been launched in Iraq.

Next, with the 2025 Strategy as the guiding principle and the transformation into a "global mobility technology company" as the goal, GWM will continue to make all-out efforts and overcome all difficulties to promote the continuous improvement of the product brand matrix and the scientific and technological R&D strength, deepen its global development, and try to achieve a new development peak.